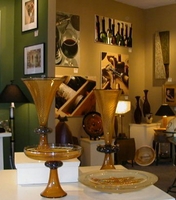 Earthenworks Gallery – voted as one of the Top 25 Retailers of American Craft. The Northwest’s best source for fine art and crafts. Delivery and art consultation available.

GET TO KNOW EARTHENWORKS GALLERY …

The story of Earthenworks Gallery is a love story of sorts – starting with two Northwest-born teenagers who fell in love with art as they fell in love with each other. And like with most love stories, they began their journey with a rather humble beginning … knowing that if they worked hard together and stayed focused on their goals, they’d someday have the gallery they dreamed of in their early days as a couple, and then as a young family.

This is the story of Don and Cynthia Hoskins – who today own Earthenworks, one of the Northwest’s premier destination galleries in La Conner, Washington.

Their journey began when Don was just in high school and took several art classes – including a pottery class. From those early days Don learned that he not only loved art, but had a talent that he eventually cultivated into Bachelor degrees in Fine Art and Art Education.  After graduation, Don and Cynthia moved to Oak Harbor, where Don taught middle-school arts education and in his spare time concentrated on honing his pottery skills, while Cynthia built a career in the retail industry. In 1977 Cynthia and Don opened their first gallery in Oak Harbor, showcasing Don’s pottery along with artwork from a few other local artists. It was a slow start and they worked very hard to make a go of it – Cynthia remembers tending the gallery while their infant daughter slept under the counter … much to the delight of their patrons.

All the while, Don continued to create beautiful pottery which he began showing and selling at other galleries around the Northwest. As Cynthia says, “Not everyone is cut out to be artists and gallery owners. We started with $200 of our own money and $200 from a friend and hoped that our love of art, and the artists we came to love as well, would someday lead to the kind of gallery people would truly appreciate.”

In 1981, while on a trip to check on his art at several galleries in Cannon Beach, Oregon, Don started looking for a new location for their gallery and decided to look at La Conner. The Northwest Arts movement was by then in full swing in La Conner and Don and Cynthia realized that as an up-and coming destination community La Conner was the perfect place to start their new journey with a larger gallery featuring more of their favorite artists. With the La Conner gallery quickly becoming well-known throughout the Northwest, Cynthia and Don opened a second gallery in Port Townsend.

Fast forward to 1986, when Don and Cynthia purchased the historically-significant Hotel Planter building on First Street in La Conner then began the job of renovating the decrepit and condemned building while following the rigid federal guidelines for historic building restoration.  Today, the building that houses Earthenworks Gallery is also home to their other business – Hotel Planter, plus several other shops on the street level.

What inspired them in the early years still inspires them today: talented artists who love their craft and are meticulous about their presentation; collectors from all over the globe who appreciate Cynthia and Don’s knowledge of fine art; and their ability to mentor fine artists, many who have become nationally acclaimed artists in their own right. 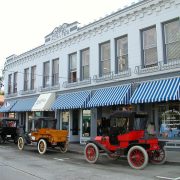 The History of the Hotel Planter 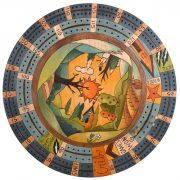 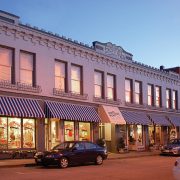