Usually when imbibing your favorite Indie Beer, you are drinking a combination of 4 ingredients: water, malted barley, hops and yeast (if drinking Budweiser add some rice and if drinking Coors or Miller add some corn). Of these 4 ingredients, barley leads the pack in importance as barley gives beer its color, underlying flavor, sweetness, body, head of foam and mouthfeel. Today I had the opportunity to ride along with Dave Hedlin, third generation farmer, of Hedlin’s Family Farm in La Conner, WA. Hedlin’s Family Farm is located less than 10 miles from Skagit Valley Malting where the barley will be malted when harvested in late August. Today Dave was planting organic Skagit Copeland Barley.

Skagit Copeland Barley is a two-row spring variety which has distinctive regional flavors, such as honey and graham biscuits. The Valley’s remarkably plump kernal size and proteins make Skagit Copeland distinctive and more intense than typical Copeland grown in the North American Great Plains. What also makes this barley remarkable is Dave the farmer and the maltsters over at Skagit Valley Malting. Knowing the region of where your barley is grown and recognizing the values of the farmers and maltsters, will only deepen your appreciation for your love of drinking beer with Skagit Malts. Dave met me this afternoon at the red barn behind the family farm house. After asking me to not fall off the tractor and giving me some basic tractor safety tips, I hopped on the back of the tractor above the harrow. Growing up in Iowa, living in La Conner for the past 22 years, hiring the band The How and the Harrow for Skagit Farm to Pint FEST, you think I would know what a harrow is. Nope. I thought Dave was saying arrow. The harrow’s purpose is to cover the seeds once they are metered by the grain/seed drill. Dave carefully watches as he plants the organic Skagit Copeland Barley. He only looks up to wave at another farmer, to point out a unique bird (Killdeer) or to smile at the farm workers.

I will be following this beautiful field with the Skagit River Delta on one side and the town of La Conner on the other side (which includes the Salish Sea/Swinomish Channel, museums, boutiques, a brewery and some great restaurants) throughout the summer. I will join Dave again at harvest time. “What kind of ice cream would you like?”, Dave shouts out to the farm workers before driving me back to my car. Now that’s the kind of guy I want tending the most important ingredient in my beer! By Julie Burgmeier
From Skagit Farm to Pint

Harvest Time in the Valley! Purchase your tickets to Brew on the Slough! CHEERS 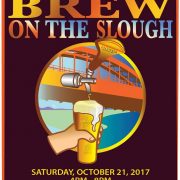