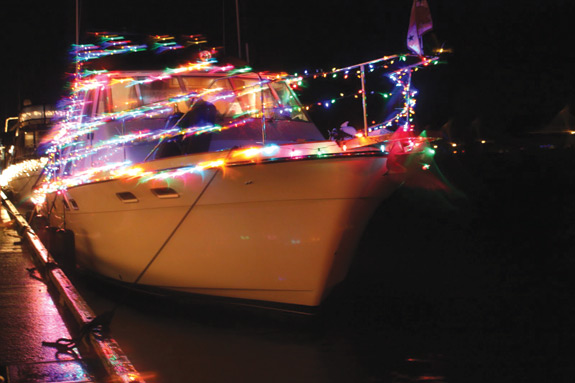 Each year a wonderful nautical holiday event takes place in the friendly and welcoming community of La Conner Washington. This event is known as the Lighted Boat Parade and it happens this year (2017) on December 9th from 6 to 7 PM. Mark your calendar because this is a special evening to create holiday memories that you and your family will not want to miss. When the event gets underway, a variety of boats assemble at the north end of the La Conner Marina and then navigate in lighted fashion along La Conner’s eclectic and picturesque waterfront.

The impressive gathering of beautifully lighted boats makes its way along the Channel Passage also known as La Conner’s boardwalk. This floating parade even passes under the famous Rainbow Bridge. Those attending can expect the parading boats to turn around either at the Shelter Bay Marina or by the last home on the channel if the tide happens to be low that evening.  “We try to make the parade as safe as possible,” says Swinomish Yacht Club Commodore Bob Davisson.

In previous years dozens of boats participated in this exciting maritime gala. That said this year the Swinomish Yacht Club is expanding to include not only the Shelter Bay Yacht Club but also the Fidalgo Yacht Club, so look for more boats than ever this time around. Those interested in a little bit of history regarding the Lighted Boat Parade should know that the event dates all the way back to 1974. Keep in mind that the event has never been canceled even when the temperature dips well below freezing. The Lighted Boat Parade is hosted by the Swinomish Yacht Club and was officially chartered in 1972.

Unofficially, however, the event traces its beginnings far back to 1939 when Milo Moore, the then Mayor of La Conner, was the first Commodore. Recent years have seen the Lighted Boat Parade take on a number of unique and clever themes. This year’s theme is National Lampoon’s Christmas Vacation and last year it was The Grinch Who Stole Christmas. There have been a number of memorable event winners in the past that are worth mentioning. For example, in the year that the Seahawks won the Super Bowl, the winning craft in the Lighted Boat Parade proudly displayed a 7-foot replica of the Super Bowl trophy.   “It was an experience seeing the spirit of the Seahawks on the channel that evening,” says Davisson. The cleverness never ends as was evident in another year when it was only 13° outside and one of the boats on parade featured a dancer on the bow of the boat sporting a black leotard that was covered in lights. The site of this illuminated dancer energetically dancing to music was truly memorable. As the parade concludes each year, a member of the Swinomish Yacht Club scurries down to the La Conner Tavern to gather the results for the people’s choice award for “best” decorated boat. To cap it all off the winner as well as the runners-up receive gift certificates from local La Conner restaurants. In past years these restaurants have included the La Conner Tavern, La Conner Brewery, COA, Nell Thorn and Anelia’s. As a note, bookings and reservations for local restaurants fill up quickly during the running of the Lighted Boat Parade. With that in mind, if you are planning on attending the parade, be sure to make reservations as early as possible “The most fun part of the parade is seeing all of the people on the La Conner boardwalk cheering us on!” says Davisson. 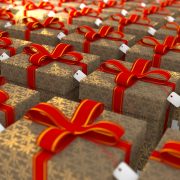