Robert McCauley’s solo exhibition American Fiction features work from the 1990s forward. McCauley’s main themes revolve around worlds in collision, addressing topics of cultural displacement and destruction, as well as our relationships with nature and the environment. He speaks to global issues, yet his art has a distinctive Northwest feeling with iconic and familiar subjects such as bears, mountains, and long-lost fishing holes.

McCauley draws from various themes and periods in Western art history and literature. He employs a Luminist style in his romantic yet somber paintings, and easily jumps to the surreal with juxtapositions of the natural world and humankind. He belies the casual viewer through his quirky senses of endearment and humor, but he will lead the more curious and willing into deeper layers of meaning. The artist challenges past beliefs which resulted in mandates such as ‘Manifest Destiny’ and ‘Westward Ho.’

McCauley’s artwork nods to the writings of philosophers such as Umberto Eco (Foucault’s Pendulum) who said, “Everything is repeated, in a circle. History is a master because it teaches us that it doesn’t exist. It’s the permutations that matter.” Viewers often experience the sensation of being watched – McCauley’s paintings seem to cast a gaze, and we are momentarily still. We are caught in the moment, suspended in limbo, and pointed towards an uncertain future. McCauley wants us to revisit and question history, so we can collectively forge a better destiny.

McCauley was born in 1946 and raised in Mount Vernon, WA. Coming from generations of loggers, his childhood was full of watching the forests fall, something that proved to be rather difficult.

Originally interested in oceanography, he switched to art in college. McCauley graduated from Western Washington University in 1969, and in 1972 was awarded his Master of Fine Arts Degree from Washington State University. McCauley became professor of art at Rockford College in Illinois (now Rockford University) in 1972. In 1982 he received a fellowship from the National Endowment for the Arts. Over the years he also received a fellowship in painting from the Illinois Arts Council, and a research grant (on Kwakwaka’wakw Culture, Vancouver Island) from Rockford. He served for many years as Art Department Chair at Rockford, until he retired in 2008.

Invisible: Selections from the Permanent Collection Invisible: Selections from the Permanent Collection is truly the product of a team effort: the exhibit was curated by MoNA’s curator and the five classes of 7th graders at Lucille Umbarger Elementary School! This quarter, the program staff at MoNA want to focus on questions about who has a voice in our society and how can we hear from the voices that have been stifled or are hidden from view. So, we asked over 100 7th graders for their help on the topic of invisibility.

There are many ways to be invisible. Maybe your voice or story has been silenced, or you don’t see characters that you can relate to in popular culture. Perhaps there are prevalent attitudes that diminish your sense of ownership over your own identity, or you are told that you are not good enough. Maybe people insist on telling your story for you instead of listening to you speak about your own experience. These are all questions that we explored together when curating this exhibit.

So, how can over 100 people curate one exhibit? This exhibit is only possible because participants trusted each other and listened to their fellow collaborators. To begin, students gathered together in small groups to put together mini exhibit proposals. They chose three artworks from the Permanent Collection that they felt embodied the theme of invisibility and placed them for the exhibit floorplan. The students then took time to write by themselves about an artwork that resonated with them personally, and those writings are available for you to read. The resulting exhibit is also based on the students exhibit proposals. Curators are the bridge between the artwork and the public, and these students took great care in presenting a deep and personal exhibit for the MoNA visitor.

Creativity through Art in Later Years I teach three ongoing weekly classes, two acrylics and one watercolors, at both the Anacortes and Burlington Senior Centers.  I teach all levels TOGETHER, no “beginners,” “intermediate,” or “advanced.”  My theory is that my students all learn together and learn from each other. Since many of them are snow birds, or have other activities, all of my classes are drop-in.  I teach in two-month themed series. We just finished a series called “All Creatures Great and Small,” animals with fur, feathers and fins.  I send multiple references and lessons by email, and they can choose to bring their own reference, if it relates to the lesson, so their work doesn’t look like “paint-by-number.”
I love watching my students grow.  We have a critique at the end of class. They have to say first what they like about their work, and then what needs improvement.  I want them to have a positive feeling of accomplishment, so we try to get pieces finished or almost finished in each class. These are not masterpieces, but studies.  I believe that you need to assume a person can DO something, so I just assume that folks can learn to paint, and they do.  I believe has creativity in their soul, and wants to learn ways to express themselves, no matter what time in their lives.
I have taught folks up to 99 years old, but also taught home school kids. Three people attended class to within weeks of dying.  One woman told me I kept her “alive” for three years longer than she expected to live!  She was still emailing me until the day before her death.  Some say to me that coming to class is the highlight of their week.  I think that whatever creative passion one has in their later years, whether it’s for painting or other art-making, if they explore what that means to them, it can really be an important element of positive aging.
-Dee Doyle 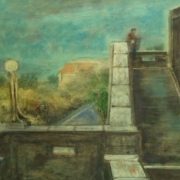 Explore all that “MoNA” - The Museum of Northwest Art Makes Possible